As winter came back the joys of winter returned too.

The first is that it’s not as dark anymore. The snow lights up everything.

The second is that it is fun to play in the snow, especially with my daughter. Last Thursday my brother and I had some time on the slope next to our house with her. Going down the hill with and without my daughter is great fun.

Here is a short film of us going down the slope.

The third this is the sound that walking on snow makes on a cold day, like today. It’s a kind of squeaking or crunching noise. It has to be below -5°C.

The forth thing is the fog over the lake on a cold morning after a ship has passed by and broken the ice.

Bicycling in the snow is the fifth. I really like it. It’s just a bit tricky when it is snowing. I did bike 17 km with the trailer last Tuesday. (For you who weren’t in Stockholm that day, it snowed more than 20 cm that day). My daughter has a swimming class and I had made up my mind to go by bicycle as I like that more. On the way there I had a real workout. On the way back it became a bit too much, so I had to stop and get some food. My daughter seemed to enjoy it though. (She slept on the way home). That’s how the bicycle and trailer looked like at the stop: 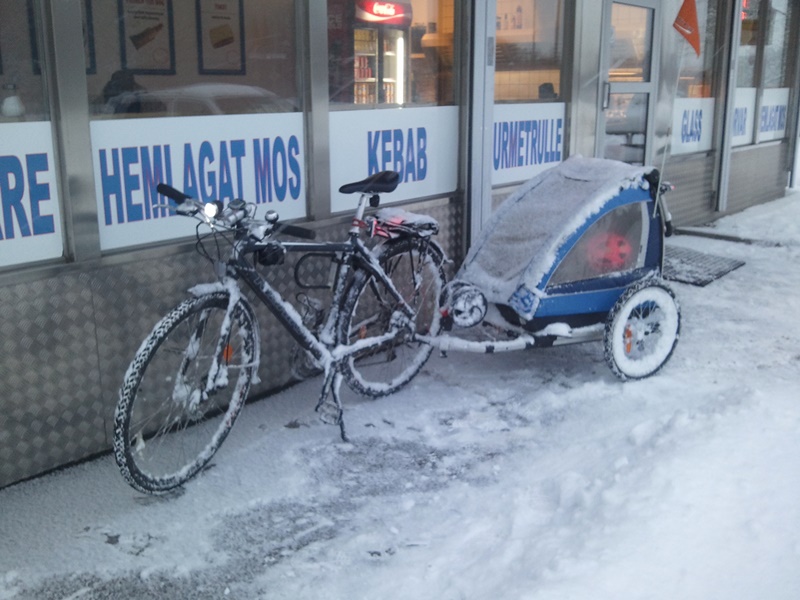