Our TV has been acting strange for a while. I don’t know exactly when it started but it might be a bit more than a year ago; it just didn’t start at once anymore but clicked a while until it started. In the beginning the clicking was just going on for a short time but it soon increased to be about five minutes. And this way it stayed until recently.

One Sunday evening a few weeks ago I wanted to chill in front of the TV and I started it, thinking it would take about 10-15 minutes (it had after the move started to take a little bit longer to start up). Half an hour later it still clicked away in the living room and I started getting worried. After one hour I gave up. I had chilled in front of the computer instead (not as chilling as the TV) and it was about time to go to sleep. I did not go to sleep, but started searching the internet if there are other people out there with the same problem.

I was not alone. Not alone at all. There are plenty of people who had the same problem as I had. Some got it fixed by the warranty. Most (that I found) didn’t due to the fact that the TV was more than three years old. Bad quality Samsung TV, with things in them that just barely survive the warranty. And it was all kinds of models affected. Ouch, that didn’t feel good. I already saw myself trying to find a new TV (from a different brand) spending lots of money we really don’t want to spend. (And no, I don’t want to live without TV, it’s just too nice to chill in front of it after a hard day).

But then I looked at the links that Google had shown me a little closer. And there were some people talking about fixing the problem. So I looked at one of the links; http://redpushpin.blogspot.se/2011/08/repairing-samsung-lcd-tv-with-clicking.html

and it looked kind of easy to fix. So I decided I would give it a try. One or more of the capacitors could have popped. The fix being replacing the capacitors and then it would work again. Just make sure you don’t use the same ones as they were not really good enough only coping with 10 V, one should use at least 12 V or higher (all other things the same).

The day after, in the evening when our daughter was asleep, I unscrewed the back of the TV and saw the problem right away. Two of the capacitors had popped.

Here they are marked.

So I unsoldered them and ordered new ones. Then the big wait started. It took ten days until the parts came. Ten long days without TV. Okay it was not that bad, but still.

When the parts arrived I soldered them into place. I’m actually kind of proud of my soldering even if they are not as perfect as the others on the circuit board: 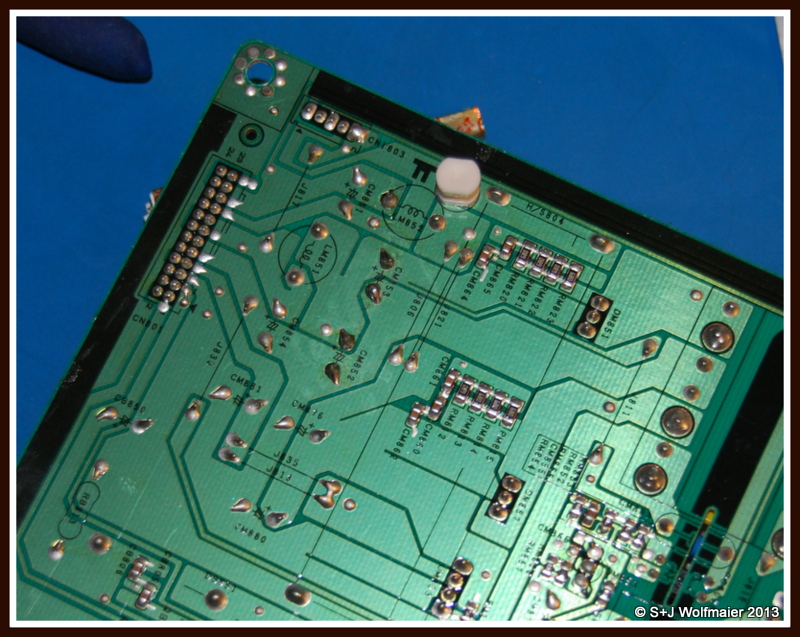 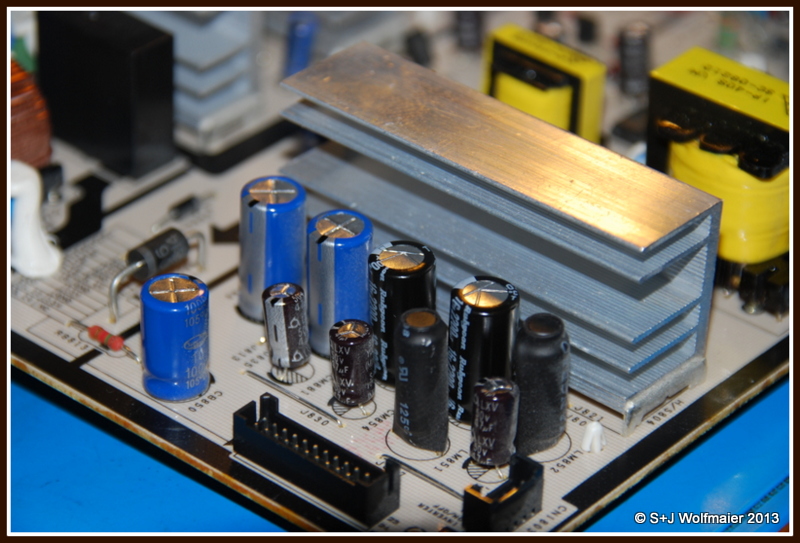 This is how they looked from the other side. (It’s the two black ones with a “K” on top).

After that I put everything together again and plugged all the parts in. I pressed the on button, it started right away and I had a little victory dance.

Sure all warranties are void now but hey, they were void already before due to high age. And watching TV isn’t an activity that needs to be planned ahead anymore.

Today our daughter slept till half past nine. And it was just the right day. We didn’t get into bed before late. She had already slept for five hours when we joined her. That usually is a good plan to get a short night’s sleep. Not so tonight.

The reason we stayed up late last night was that we watched the third and final part of the miniseries “Unsere Mütter, unsere Väter” (our mothers, our fathers) or “Generation War”. It made me thinking, this is what my grandparents lived through. Maybe not exactly, but the things going on around them were the same. It made me think of grandfather’s diary that he wrote during his imprisonment in France. It made me remember the things grandmother told me of the time, mostly the time after the war. How they had to walk home. How life changed.

I can really recommend the series. It’s three 1½ hours episodes so it takes some time, but it is time well spent. And you get a free lesson in German, as the series is a German production. Here is the link to the IMDb site: http://www.imdb.com/title/tt1883092/

Today was a good day.

All day with my lovely family.

Now the day is coming to an end.

I’m warm. (Not thanks to the weather).

Ellinor showed her finest side.

Susanna doesn’t mind the music too much.

Had a good nap on my parent’s sofa.

Nice talk with my aunt and uncle.

Not thinking about getting things in order. (None of us did).

It all started already yesterday.

All three of us being laidback: 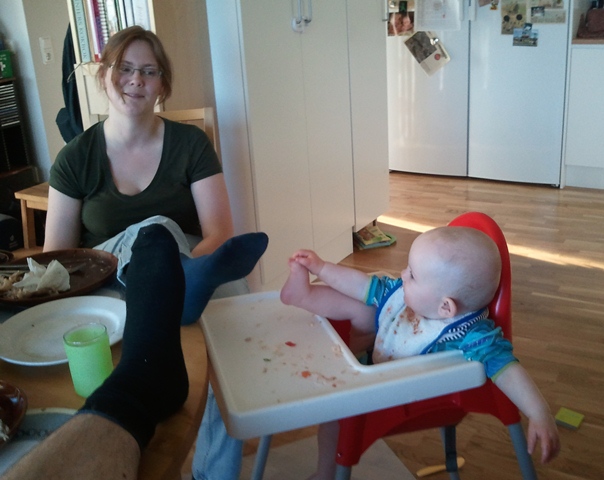 That’s just how we are…