Today we finally had our first homegrown meat. One of the chicken became a rooster. He didn’t get along with the old one so he had to go.

Now we finally had the opportunity to make him for dinner. Tasted really good. All the vegetables were also homegrown, just some seasoning wasn’t from our place and the wine of course. We could have had our cherry wine but wanted some Pinot Noir.

The end of 2019 is near. It was a good year. Susanna started working again and I have been on parental leave. The children are growing. One is in school and two at home. We are keeping busy with all kinds of stuff.

The garden has given us plenty of vegetables. And will continue to give us more in the next months, we still have plenty of potatoes and onions. Today we harvested for the last time this year. Carrots, red cabbage and regular cabbage. Now only thyme, parsley and kale are left for later harvest.

May 2020 bring plenty of fun and good things!

I just have to tell you about our garden. We had a bit more time to put into it because I was at home with the kids. So we got it looking really good. 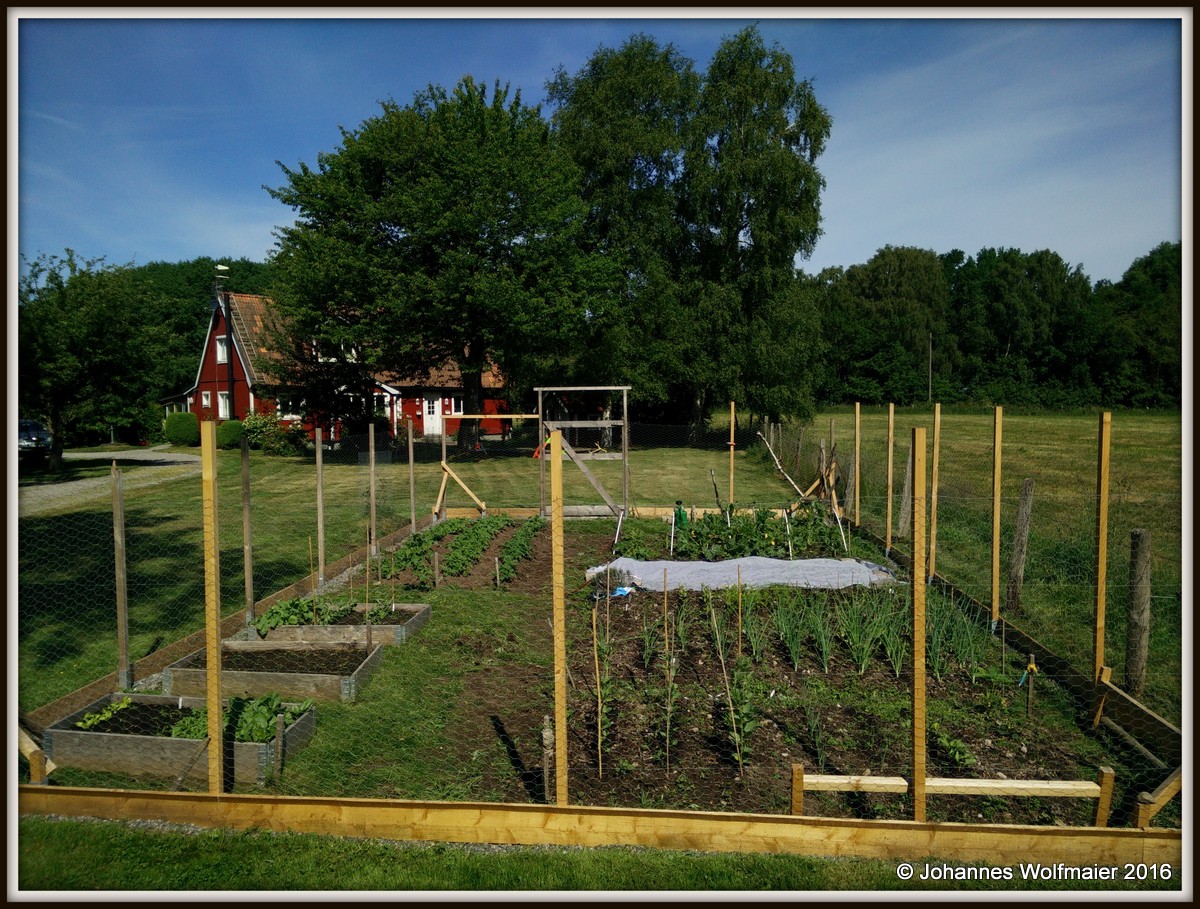 Now we are earning the reward for the hard work. Today we gathered all this food in our garden. (Sure the work effort to get plums isn’t that much, basically just gathering them before they all fall to the ground). 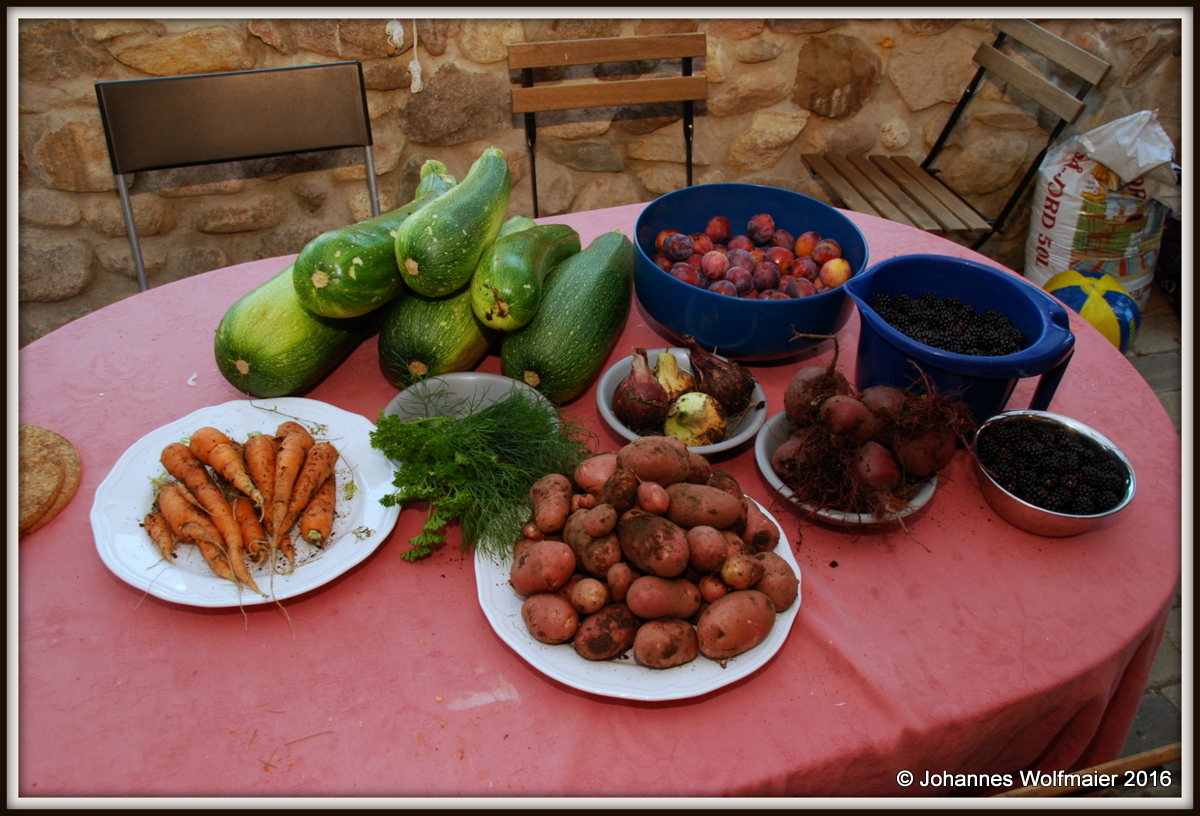 Today we collected squash, plums, blackberries, beetroots, two kinds of onions, potatoes, parsley, dill and carrots. It’s such a joy to have all these good things to gather in the garden.

How can dinner be anything other than good? 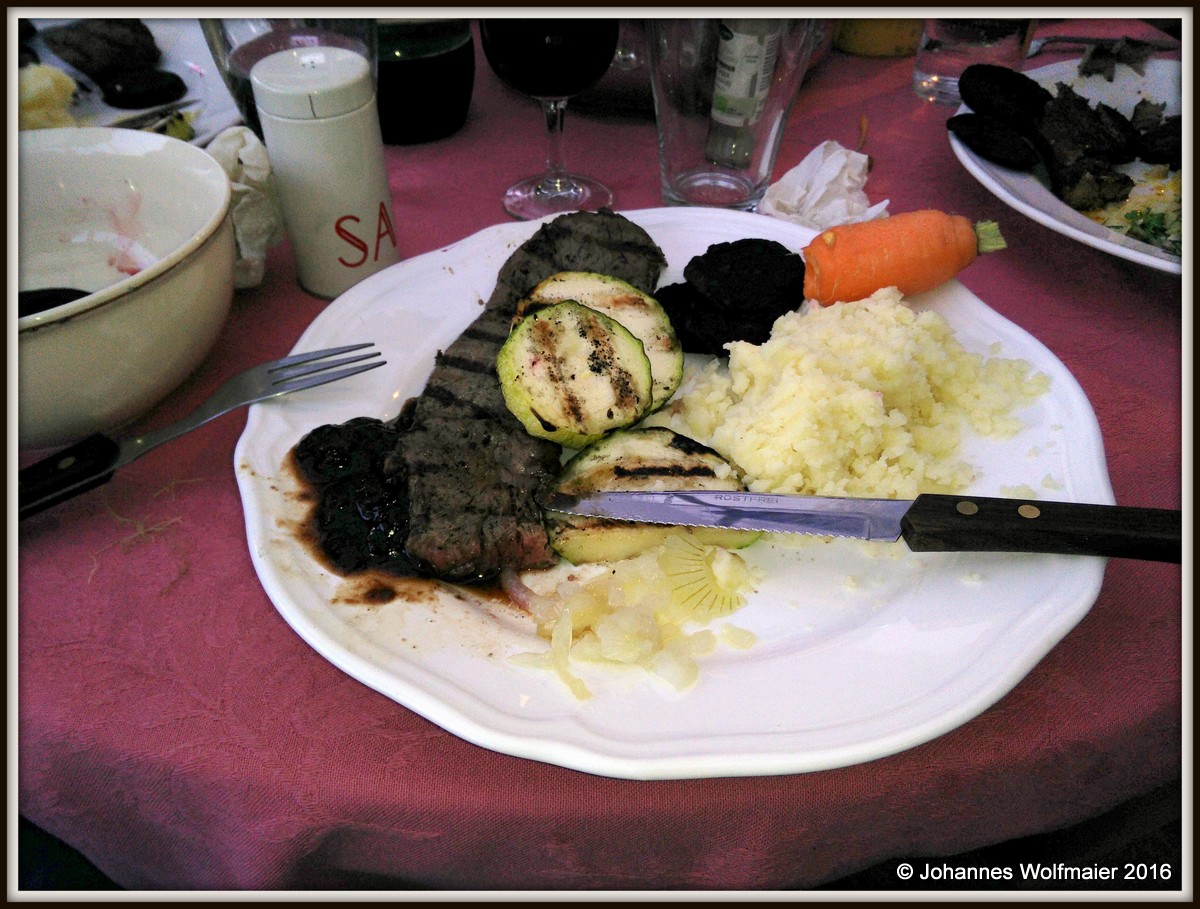 Sorry I started eating before I took the picture, it was just so good. Almost everything came from our garden, just the meet and the small stuff you can’t see isn’t home grown.

Today I think I made the perfect Friday night dinner. You decide for yourself if you agree.

Take one day of perfect Friday with beautiful snow and sunshine.

Blend with a bicycle ride and a nice walk through the forest. 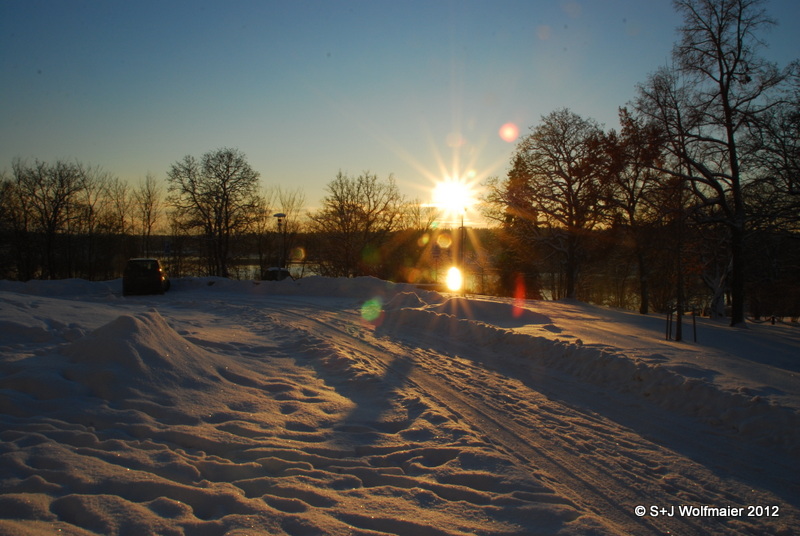 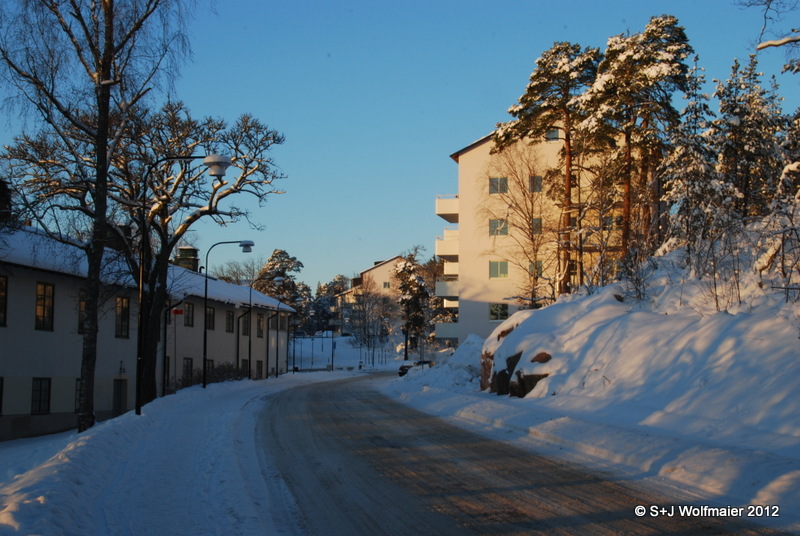 Prepare a sourdough-sunflower-seed bread in time (in the morning) for part of it becoming the buns for the dinner.

While the daughter is sleeping (after a short stay at the open preschool) start making the last preparations for the bread. 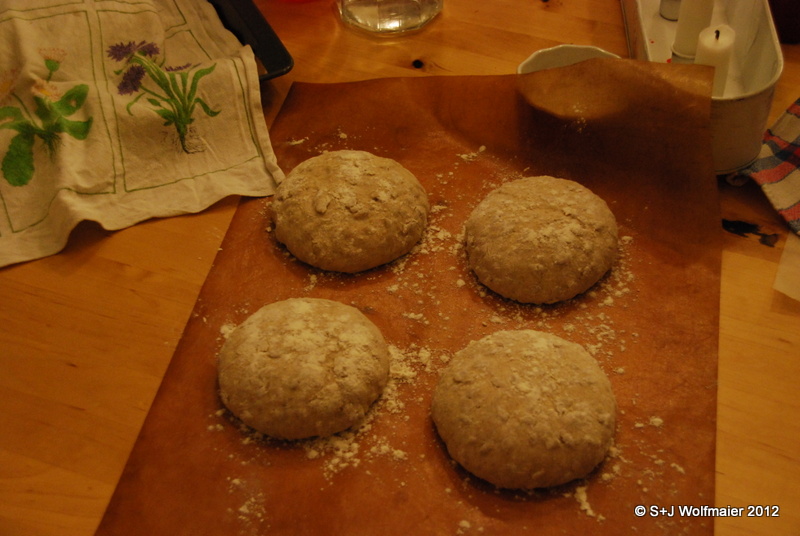 Take it easy for a little while.

Make dinner; the task for today was; it should have bacon in it. 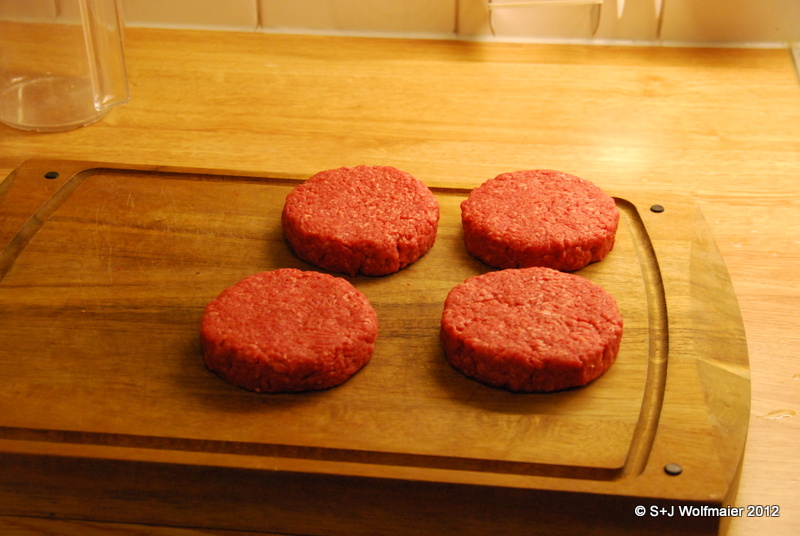 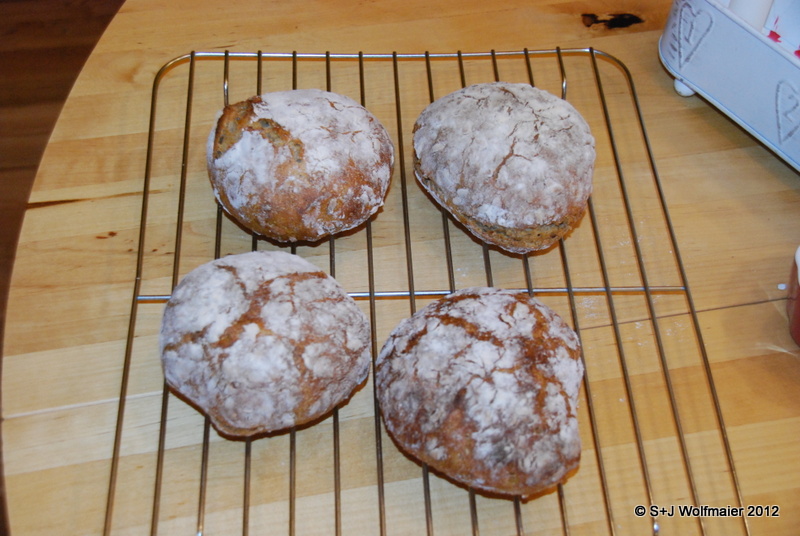 Put french-fries in the oven.

Have your wife come home.

Take french-fries out of the oven.

Prepare lettuce and other assembly details.

Put the rest of the bread into the oven. 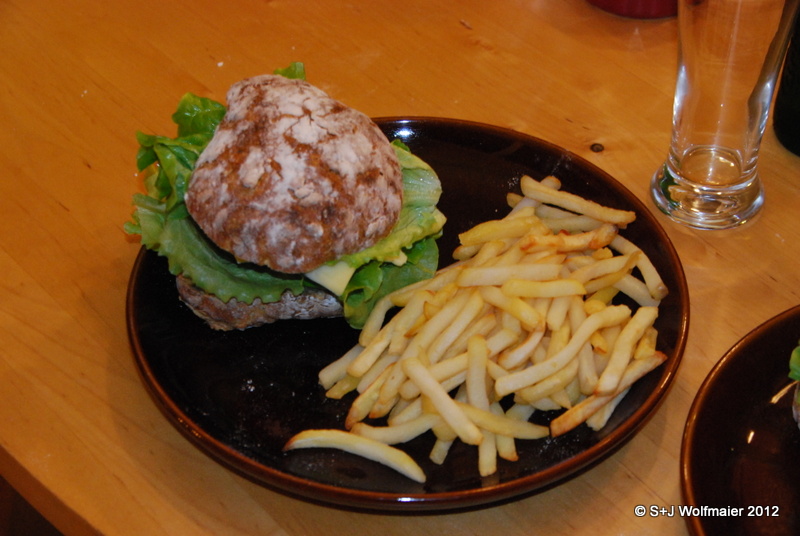 Don’t forget to take out the bread before it is black. (As a good dinner takes a while it might be in the middle of it).

This last two weeks I have had a little project. It was to start my own sourdough and bake bread from it. Tonight we had the first slices of it. It actually tasted really good, like the one mum made when I was a kid.

Sourdough is a bit of a project in itself. It takes a while to start it, but they say it is easier if you have the right kind of flour to start from. In the beginning of September we got some rye flour at the old mill where we live. (It’s an old mill that is preserved as a museum, but they run it and make flour a few days every year). The flour was organic too, this because you need as much of the natural yeast that starts the sourdough and as little other things like leftovers from pesticides or fertilizers.

To start all this I had a little help. We have two good books about baking bread: (Both in Swedish)

Gateaus brödbok by Claes Christenson (brödbok = bread book) that I have used a lot before to make my Sunday buns. It has all kinds of bread in it, but mostly yeast based ones.

Surdegsbröd by Martin Johansson (surdegsbröd = sourdough bread) that I used to get my sourdough started and some ideas how to bake the bread, like using a thermometer to know if the bread is ready instead of just timing the baking.

None of these books has simple plain sourdough bread in it. (Okay some are fairly simple, but not just rye, water and salt). And I wanted to start out with a rye bread that was just that simple and German. So where to look, our good friend Google sent me to this page: chefkoch.de that helped me with the last part. I did half the amount in the recipe, I didn’t want to waste too much rye if I failed and our food processor might retire if I have a too big dough in it.

Just a few lines about our food processor, it’s a few years old, actually I don’t know how many as I got it second hand from my grandmother some years ago. It is one of the kinds where the bowl and the hook turns, makes a lot of noise and is a bit tricky to get clean. When I lived by myself I had it packed away above the fridge, making it a bit of a project just to use it, needless to say I didn’t use it very much then. Now we have it standing on the counter so it’s just to start it whenever it is needed. It also has a vegetable chopping part and a blender.

Back to the bread:

As the bread got ready, the baking took a lot shorter than what the recipe said, I wanted the bread to be 98°C inside as I had learned from the book on sourdough and that took only about 45 minutes not 1 hour and 15 minutes as the recipe sais, I wonder how the bread would have been if I had waited that long?

After dinner (we had Penne with a mushroom, tomato and crème fraiche sauce) we all had a slice of the bread. It was wonderful. I never imagined that I would actually be this successful on the first try. Sure I have been baking Sunday breakfast buns for a while now, but still, first loaf of bread, first sourdough bread and first bread I made that was only rye. It tasted just like when I was a kid. 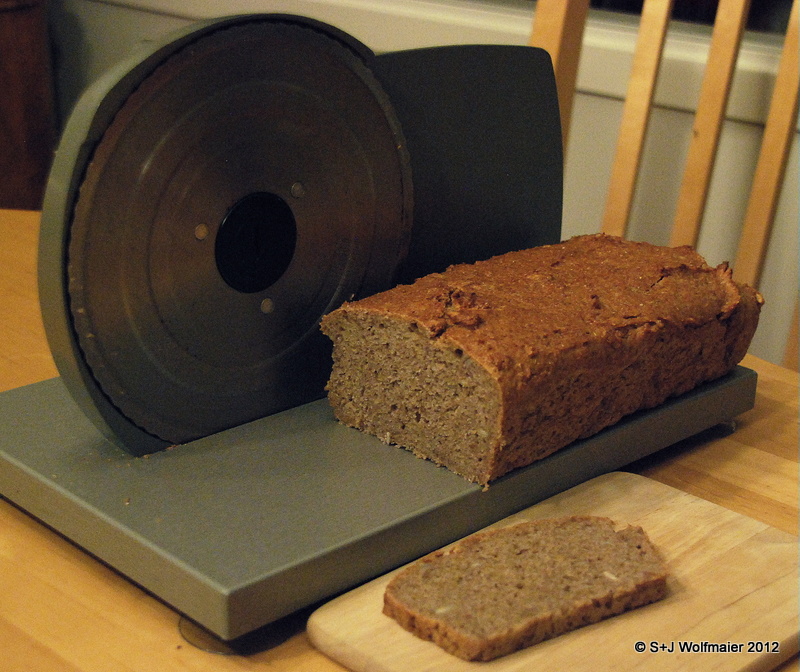